Shopping around in the UK Lift Industry 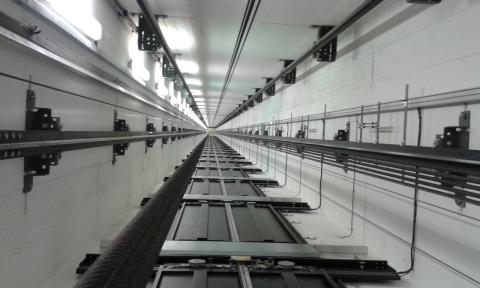 The UK lift industry is unusual in as much that the major lift manufacturers of Europe, Asia and America that dominate much of the rest of the world do not have it all their own way in Britain. This is because there are skilled independent contractors and manufacturers who can offer good quality equipment, which can compete with their multi-national competition.

Whilst the major lift contractors (and their subsidiaries) still make up a large proportion of the lifts installed and maintained in the UK, there are often opportunities to utilise a smaller company who can offer the same level of proficiency, whilst offering potential savings due to lower overheads, open protocol equipment (i.e. equipment which can be worked on by any competent lift contractor and do not require specialised tooling, unlike proprietary systems from the major manufacturers) and a more personable approach.

In our role as an independent lift consultancy, we work with companies large, small and somewhere in-between, ensuring we obtain the best possible value for our clients. With so many lift contractors to choose from and each having their own strengths and weaknesses, a key part of our position is to appoint the correct contractors to each project to ensure expectations can be met, while keeping to the confines of budgetary constraints.

With major cities building ever upwards, due to limited space and increasing population, the skyline is getting higher year on year, with people now regularly living and working 30 and 40 floors above ground. With high-rise developments of this nature, the major lift manufacturers are best suited to meet the needs of the developers (large, high speed passenger lifts, delivering people to their floors as quickly as possible). These companies spend millions annually on product development, with test towers around the globe. Equipment installed in this type of property is generally some of the best available, with individual lifts costing hundreds of thousands to install (and tens of thousands to maintain).

At the other end of the spectrum, the major contractors also mass produce low and mid-range products for less demanding environments. These products are designed to provide affordable lift equipment to smaller developments and most of them have been developed following from the initial schemes to provide motor room less (MRL) equipment to the building industry, removing the need to provide extra space in a property for lift machinery (maximising lettable area). This equipment is favoured by developers who look to maximise their investment and as such, thousands of these units have been installed in the UK and Europe from the mid 1990’s onwards.

The other equipment far too frequently installed by developers over the past 10 years or so is from the smaller European/Asian manufacturers, who provide equipment that is not fully supported by the UK lift industry, with limited technical support, access to spare components for repair, etc. We are aware of a great number of lifts being in service for a very short period of time (1-2 years) before major investments (replacement controllers, machines, door operators, etc.) are required to guarantee reliability of the lifts in question. This equipment, whilst cheap for the developer, often costs the residents large sums of money to put right, a problem they would have been unaware of when purchasing their property.

The major lift contractors spend large sums in developing their products and as such, when dealing with high-rise properties, the installer of the equipment is often best placed to continue with the maintenance of the lifts, having access to information and tooling not readily available elsewhere.

However, with regards to low and mid-rise lift equipment, it is always prudent to shop around. This is not to advocate changing contractors frequently for the sake of it (after all if a lift company is performing well, continuity of maintenance will aid to extend the life cycle of the equipment); however, we are advising that looking to ensure best value is being received is always a worthwhile exercise.

As with any industry, knowledge is transferred from businesses over time as personnel move from contractor to contractor, as such, when an engineer leaves a company, their new employers benefit from proficiency on certain products, which is passed on to colleagues within that company, meaning employees of Joe Bloggs Lifts start to know how to work on Fred Smith’s Elevators and vice versa. This process takes time from release of a certain product range, but with lifts of 5, 10 or 15 years old, chances are that both technical assistance and spare components can be obtained by companies other than the manufacturer, giving you the opportunity to review the value of your contract.

In recent months we have been involved with a number of properties where the lifts have been installed and maintained thereafter by the same contractor. In some of these circumstances, the maintenance levels have been good and the lifts have been reliable, which is of course high on everyone’s priorities. However, some of the sites we have been involved with have had the lift contractor missing visits (sometimes for years), not performing the correct level of maintenance in relation to their contract and not fulfilling their obligations with regards to response times or lift availability “guarantees”.

To make matters worse, in some cases the lift contractors in question have been allowed to keep these contracts rolling with annual increases applied, meaning we have seen contracts which have doubled and in some cases trebled in cost over the life cycle of the equipment, costing the client thousands of pounds more per year than they should’ve been paying. If these clients had have noted the problems earlier, they could’ve potentially paid for the refurbishment of the lift in the savings they would have made. Instead, they are now faced with an aging lift and shortfalls in funding.

As independent lift consultants, we are here to assist our clients with managing their portfolios to ensure they obtain good value from a maintenance perspective, but also to ensure that plans are in place for the inevitable later stages of the life cycle of their lift equipment.

Next stage of life with “proprietary” equipment

With such a vast number of products installed in the UK (and Europe) since the mid 90’s, many of these lifts are now approaching the end of their design life. The expected design life for a “package” MRL (motor room less) lift as highlighted in the CIBSE Guide D: 2015 would be circa 18-20 years. With so many of these units reaching an age where their economic design life has been surpassed, what are the best options for Property Managers and their clients to retain a reliable lift service?

Previously these lifts have been removed and replaced when their useful life span has been exceeded, but this is of course a terrible solution in terms of its green credentials, with perfectly good steel work and various components with longer life than the control system being thrown away. Not to mention all of the effort to manufacture a whole new lift, transportation, etc. and the associated costs!
So now, many of the major suppliers have their own modification solutions, which have been designed around the original product and can be a good solution. However, in some instances this ties the client to the contractor for a further period of time and the cycle continues with increased maintenance costs.

Due to recent advances in technology and greater knowledge of the “proprietary” equipment designs, independent suppliers have now developed open protocol control systems which can replace the closed protocol control systems favoured by the major lift manufacturers. These refurbishment solutions are relatively new in the UK industry, but will become more commonplace as they are now frequently installed.
In the UK, we have a large number of controller manufacturers who export their products globally, as they are renowned for their reliability, longevity and support. Therefore the option to utilise reliable, open protocol equipment for modernisation schemes for MRL “package” lifts installed by the major lift manufacturers is now readily available.

These open protocol control systems have been in development over the last 5-10 year period to pre-empt the first phase of MRL “package” lifts approaching the end of their design life. The new control systems can be coupled to the existing machines to ensure the guide rail configurations and landing door positions can be utilised (reducing both installation time and cost).
The major benefits in utilising UK based open protocol systems for the refurbishment is that the lift can be readily maintained by any competent lift company, allowing the competitive tendering of maintenance contracts. This generally proves to be a cost effective option over the medium and long term, rather than being tied to one the of the major lift manufacturers.

Furthermore, replacement of an underachieving maintenance company can be easily enforced when non-proprietary equipment is used, meaning maintenance regimes tend to be more thorough, adding further value for money.

Open protocol controllers ensure technical support is readily available and utilising local suppliers (most British controller manufacturers have bases in London, Midlands and the North for a swift dispatch of required parts) with spare components are easily obtained (within days rather than weeks). This ensures a fast and efficient service in the event of failure, which can be priceless when a single or busy lift is out of service.

With UK exports and our position as a trading nation under scrutiny of late, the UK lift industry has many things worth crowing about and when correctly approached, can offer good engineering solutions to problems faced.