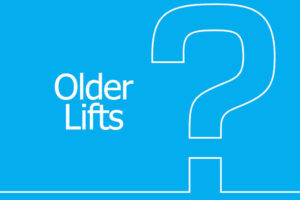 What are the benefits or pitfalls of future action (or inaction)?

My lift has been working well for 35 years, how much longer can I rely on it and what happens if it fails?

Lifts are electro/mechanical in nature, with designs ranging from simple operating systems to multiple lift car groups serving large numbers of floors. While the complexities may alter wildly, the fundamentals are always the same… a good maintenance and repair regime will improve the lifespan of the equipment. While this is a basic rule, the inescapable truth is a lift is as reliable as its weakest component, whether that is the controller, door operator or motor.

If you own a lift less than 5 years old, a major component failure should still enable a replacement part to be sourced (though this is not always the case). Lifts of unusual continental origin often prove problematic for obtaining replacement parts, which generally occurs when the developer of a property has opted for the cheapest lift installation available, which can regularly become a false economy.

Comparable such as cars or computers are not expected to reach these life cycles (with maybe the exception of a classic car with a “no expense spared” maintenance regime) so why do we regularly expect this from our lifts?

Older lifts (pre-1980’s) were often built with longevity in mind and are often found to be operating with minor alterations, long after their contemporary counterparts have failed. Often simple component replacements will see the lifts operating again after a failure. Additionally, when the time comes, refurbishment is generally a better option than replacement with these units as the mechanical elements are so robust in design and manufacture.

From 1980 onwards there was the widespread use of printed circuit boards and microprocessors, which have revolutionised the world. But with all electro/mechanical devices, while costs have been reduced, repairing individual components has become more difficult, leading to a throwaway society where televisions and washing machines are instantly replaced when faulty.

Modern lifts operate on the same principles and on some occasions a faulty circuit board can result in the replacement of an entire control system. Each lift should be assessed on this basis to prevent the unforeseen failure resulting in prolonged down time of the lift, while components are manufactured (sometimes taking months).

We are also pleased to report there are some changes in this process, with some companies now manufacturing equipment with the long term life cycle in mind, and while front end expenditure may be higher, long term reliability and overheads are significantly improved.

We are here to help!